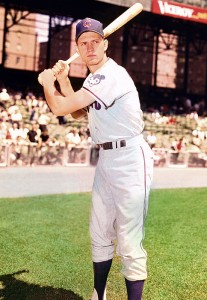 The Ken Hubbs Foundation honors the memory and exemplary life of Kenneth Douglass Hubbs. Ken was born December 23, 1941 and died tragically on February 13, 1964, at the age of 22.

Ken signed a professional baseball contract with the Chicago Cubs, and in 1962 was voted National League “Rookie of the Year”. Additionally, he won a “Gold Glove” award by setting two major league fielding records for a second baseman: 78 games and 418 chances without an error. This was the first Gold Glove by a Rookie!

Ken was an exceptional athlete, but more importantly, an example for American youth. He was an honorable young man, wise beyond his years, showing the character traits that make men great: loyalty, faithfulness, kindness, honor and tremendous citizenship. On the day he was to set fielding records, he visited a hospital for handicapped children. When asked by reporters why he wasn’t resting up for the big game, he replied, “If I make an error today, it won’t be because I was nice to somebody!” After the Cub’s home day games, Ken would return to his suburban Chicago apartment and hit the street to play ball with the kids – he loved “the kids”.

The Ken Hubbs Foundation has, since 1964, annually honored outstanding senior athletes from local high schools – from 4 schools in 1964 to 25 schools in 2015.

The Foundation selects each of the 25, male and female, Ken Hubbs School Award Winners based not only on athletic achievement, but also on citizenship, community involvement and service, student government and commitment to further their education. 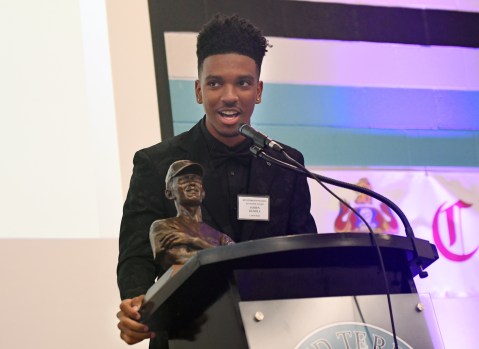 GRAND TERRACE > The number of awards has grown but the good vibrations remain.

The 55th annual Ken Hubbs awards were handed out Monday night at Grand Terrace High, with another award honoring the late Keith Hubbs added this year.

Daniels and Flores were the overall Ken Hubbs boys and girls winners, respectively. Alvarado nabbed the new Keith Hubbs Award, which goes to an athlete of high character.

The event mostly honors the late Ken Hubbs, a multi-sport star at Colton High who was also the student body president. He earned National League Rookie of the Year honors and won a Gold Glove with the Chicago Cubs in 1962, before dying in a plane crash in Utah in 1964.e overall Ken Hubbs boys and girls winners, respectively. Alvarado nabbed the new Keith Hubbs Award, which goes to an athlete of high character.

Also honored at the banquet attended by several hundred were the 50 school winners — 25 boys, 25 girls — from schools in the greater San Bernardino area. School winners were previously published. 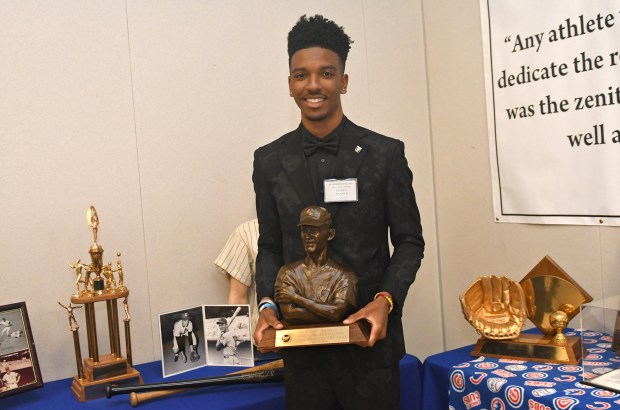 Daniels starred at quarterback for four years at Cajon, throwing

for a CIF Southern Section-record 14,007 yards and 170 touchdowns during a glittering career. He also rushed for 3,635 yards and 41 touchdowns.

He led the Cowboys to league, section and Southern California titles and a state Division II-AA title-game appearance as a junior. As a senior, he led them to another Citrus Belt League championship.

Daniels was named an Under Armour All-American and played in the UA All-American Game Jan. 4 in Orlando, where he threw two touchdown passes. Daniels was also rated as the No. 2 dual-threat quarterback in the nation in the 247 Sports Composite rankings.

“It feels great,” Daniels said. “It’s nice to have Cajon go back-to-back after Jeremiah Martin won it last year. It wasn’t something I dreamed about as a kid, but after last season, coach (Nick) Rogers told me I’d have a chance to follow in Jeremiah’s footsteps.”

Daniels, after signing with Arizona State University in December, has already been attending classes at ASU and had a 3.2 first-semester grade-point average after compiling a 3.92 at Cajon. 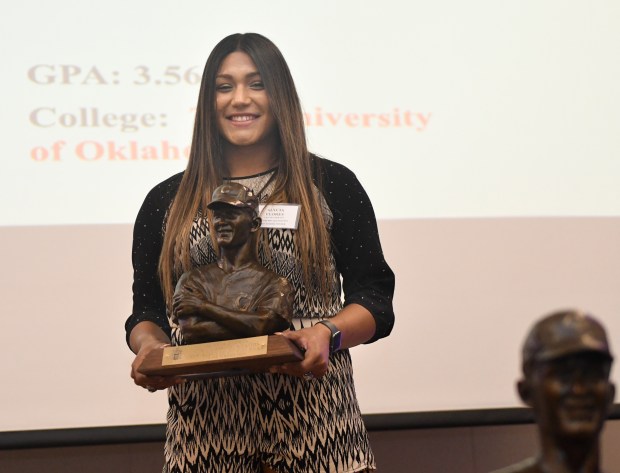 Flores, the girls’ winner, led Grand Terrace to its fourth consecutive league title and a 25-4-1 overall record this season with a remarkable effort at the plate and in the field.

An all-league first-team performer for four years at Grand Terrace, Alycia and her sister Eliyah Flores helped the Titans to a section title in 2016.

Eliyah Flores is a sophomore already playing on scholarship at Oklahoma, and Alycia will join her in Norman in the fall as the second Flores girl to play for the Sooners.

“It’s a great blessing,” Flores said of winning the Hubbs. “It is part of God’s plan and it’s nice to know He had my back, along with my parents, sisters, coaches and everyone else.”

Regarding the Ken Hubbs legacy, she said, “It’s inspirational to me as I head to Oklahoma in terms of becoming more of a leader and a better person on and off the field.”

Alycia will also play for Mexico in the Junior National World Cup in August. She has a 3.56 GPA.

Alvarado takes home the new Keith Hubbs award after starring in aquatics at San Gorgonio and excelling in several other activities at the San Bernardino city school.

She was the San Andreas League Most Valuable Player for water polo as a junior and All-SAL first team as a junior.

As a swimmer she was the Sunkist League champ in the 100-meter butterfly as a senior and qualified for the sectionals in both the 100 and 50 butterfly.

Away from the pool, Alvarado managed a 4.81 grade-point average in grades 10-12 and was the Salutatorian for her class and a scholar-athlete for four years.

Alvarado also learned with two months left in school that the yearbook committee was struggling. She pitched in with her writing and editing skills to help get the project back on track.

Alvarado will attend UC Santa Barbara in the fall, having turned down an academic scholarship to Cal.

“It’s such a honor,” Alvarado said. “Mr. Bill Webb (former Bloomington High athletic director and a member of the Hubbs board of directors) told me what a great guy Keith Hubbs was, and to win an award named after him is more than I can ask for.”