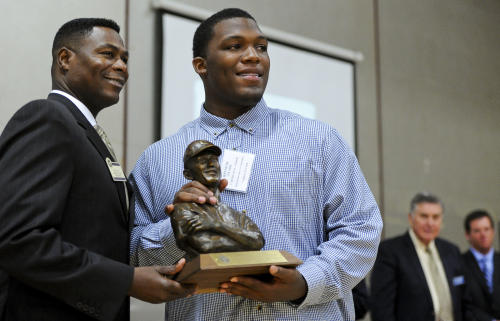 Carter’s Clark starred in football and wrestling, while Citrus Valley’s Morris is a softball standout

Both have a collection of all-league and all-CIF trophies and certificates that would make nearly any athlete envious, and both have earned Division I scholarships to continue their athletic careers.

They added another prestigious award to their collections on Monday night, as they were named the 2013 Ken Hubbs Memorial Award winners.

The Ken Hubbs Memorial Awards honor the best senior athletes from San Bernardino County. Hubbs, was a four-sport star and student body president at Colton. He was chosen the 1962 National League Rookie of the Year with the Chicago Cubs before dying in a plane crash in 1964.

“This has got to be the top award (I’ve ever received),” Clark said. “To be the named the best athlete, this is real cool. Not a lot of people can say they were the best athlete out here and I’m one of the dudes that did it, and that gives me a great feeling.

Added Morris: “I was absolutely shocked (that I won). All I can say is I feel so blessed and so honored to be receiving this award.”

Clark became the first winner ever selected from Carter and Morris is the first winner from Citrus Valley. They were picked from a pool of 22 athletes of each gender based on their athletic and academic achievements as well as community service. 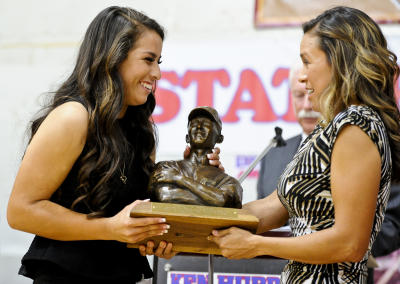 Clark had a distinguished career in football and wrestling. On the gridiron, Clark was the CIF-Southern Section Eastern Division Defensive Player of the Year last season and a first-team All-State selection as a defensive lineman. He was one of the highest-recruited players in the state and accepted a scholarship to play for UCLA.

He was also a two-time state qualifier and three-time Masters qualifier as a wrestler. He is the winningest wrestler in Carter school history with a record of 118-34.

Morris led Citrus Valley to a CIF-SS title in softball last season and earned Division 6 Player of the Year honors for her work. With her senior season still in progress, she boasts a .474 career batting average and has earned a scholarship to Iona. She also has been a member of the varsity cross country team the past two seasons.

She also excelled academically, making Honor Roll all four years of school and maintaining a 3.82 GPA.

“This ranks up with winning the Division 6 title last year,” she said. “I have to be honest I did not expect to win whatsoever, I was completely shocked when they called my name, but I’m so grateful.”