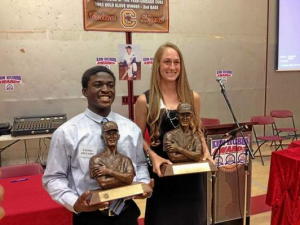 COLTON – Team and individual honors, academic and athletic, Bloomington’s Uzo Owuama and Citrus Valley’s Loren Landrus had them all.

That combination made them the Ken Hubbs Athletes of the Year Award winners on Monday night at Colton High School.

The two were first picked as the boy and girl winners from their respective schools, then got the overall awards at Monday’s banquet. Owuama is the first Bloomington boy to win the award since 1991, when Jesse Ceniceros won it. There has only been a girls award for three years and Citrus Valley has won back-to-back years after Ashlyn Morris won it in 2013.

Although Owuama culminated his high school wrestling career by placing fifth at the CIF State Championships, his accomplishments went beyond that.

“I put 150 percent into wrestling, and you could say it paid off, because I’m the Ken Hubbs Award winner,” Owuama said. “One thing my coach, Gabe Schaefer taught me in life, when you want something in life, work hard for it, it will come your way. I wanted to be a California state placer since I was a freshman.”

He was also a four-time, CIF-SS Team Dual-Meet Wrestling champion, and qualified for state in both of his last two seasons. A captain who was a two-time all-Sun pick, he won multiple tournament titles, including the prestigious Doc B Tournament championship.

Owuama, who is in the top 10 percent of his class academically, has a scholarship to continue his academic and athletic career at Grand Canyon University in Arizona.

He also volunteers as a referee for Bloomington junior wrestling and works as a food server at the school.

Like Owuama, Landrus is also a CIF-SS team champion, playing on the Blackhawks’ CIF-SS championship soccer teams the last three years. She is also a two-time all-Sun selection and was the CIF-SS player of the year as a junior and all-CIF her senior year.

“I wouldn’t have made it this far without my amazing coaches and my teammates,” Landrus said. “Because I’m not the soccer team. … I was very surprised. With all the athletes in the room tonight, I never thought it would be me. … Just to be compared to an athlete as great as Ken Hubbs is just fantastic.”

Although soccer is her best sport, she is also a good track and field athlete. She qualified for the CIF-SS Division 2 prelims in four events: 400 meters, 4×400 relay, long jump and triple jump, although the Ken Hubbs Award vote was held before she qualified for the prelims through the Mountain Valley League Finals. Her best qualifying mark came in the long jump, where she was the No. 5 qualifier for the prelims.

Landrus, who carries a 4.0 GPA, will continue on at the University of Northern Colorado. She is involved in many clubs and activities, including the Make-A-Wish Club, Octagon Club, Hope Club, National Honor Society, California Scholastic Federation and yearbook.