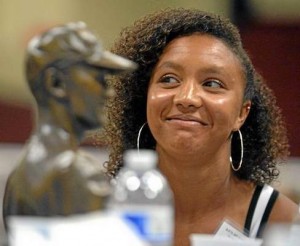 They’re outstanding students who have signed their National Letters of Intent and are elite track and field athletes.

And on Monday night, they found out they have something else in common: they are Ken Hubbs Award winners.

Jones and Webb were announced as the winners of the award at a banquet at Colton High School.

The award is in memory of the late Colton High star.

Previously, a boy and a girl senior winner were announced for 25 schools in the San Bernardino Valley, from Yucaipa to Fontana.

Jones, who is signed with USC, won the Citrus Belt League title last week in the long jump and is currently the No. 2-ranked athlete in the state in that event.

Last year, she was a state champion in the long jump with an impressive mark of 20 feet, 4 1/2 inches, earning The Sun’s Girls Track and Field Athlete of the Year. She is the first Redlands High winner in the four-year history of the girls award. She is the fifth Redlands athlete to win either award and the first since Brian Walsh in 2003.

When her brother Walter was the Redlands winner, she learned what Ken Hubbs was all about. 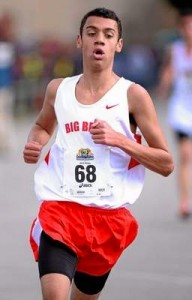 “I was hoping I had a chance,” Jones said. “It’s quite an honor. When I came here a couple of years ago because my brother got nominated, to be here and see what he (Hubbs) stood for, now I know how much of an honor it is to receive the award.”

Webb, a distance runner who has signed with the University of Portland, excelled in both cross country and track. He was The Sun’s two-time boys cross country runner of the year, winning the CIF State Division 4 title each of the last two years.

Although he aims to also win a state title in track and field, in the 3,200 meters, he has already made a name for himself in that event this year.

Webb ran the 3,200 in a time of 8 minutes, 52.27 seconds at the Arcadia Invitational about a month ago. It’s not only the top time in the state this year, but it broke the school record in the event, previously held by legendary distance runner Ryan Hall (8:55), who won the overall boys award in 2001. Webb is the third winner in his school’s history and first since Kriss Proctor in 2008.

“They told me I had a decent chance,” Webb said. “Hearing my name called was still a bit of a shock. This award means everything. It means more than any athletic achievement I’ve ever had.

“To hear about the man and the character that Kenny had, the fact they gave me this award really means a lot to me.”