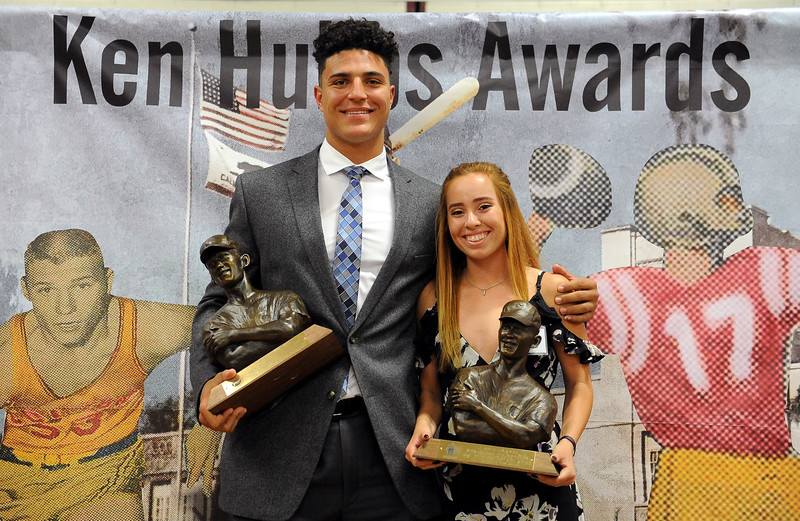 The city of Redlands has produced many great athletes in recent years, and several Ken Hubbs Award Athletes of the Year, including three of the first four girls since there was a girls athlete of the year started in 2012.

But never have both the boys and girls Athletes of the Year been from Redlands. Until Monday.

The Ken Hubbs Award, named in honor of the late Colton High standout student-athlete, is given to a senior boy and a girl from each of 25 area high schools, who represent the excellence and academics for which Ken Hubbs was known. With an overall boy and an overall girl winner announced at the end of the banquet.

Graves is the third Citrus Valley girl to win the overall award, joining Ashlyn Morris (2013) and Loren Landrus (2014) and is the fourth girl from the city to win in the six-year history of the award. REV has had one previous winner, Ronnie Fouch (2007). Phillips is the sixth boy from the city of Redlands to win the award. The boys award began in 1973. 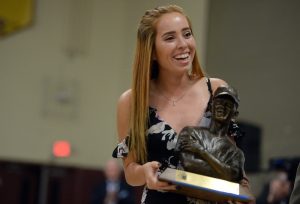 She’s also a standout track and field athlete, owning the Citrus Belt League record in the 3,200 meters and advanced to this week’s CIF-SS Division 2 finals in the 3,200. In addition, she’s been on the USA Junior National Mountain Running team, representing the team in Venezuela and Bulgaria.

“Coach Honeyfield had me come here my freshman and sophomore year to see what it was all about,” Graves said. “The year that Margaux Jones won it (2015), I thought, ‘there’s no way I’m going to have that many accomplishments.”

As has been the case in recent years, the overall winner’s accomplishments and personality traits are revealed before their names. After Graves heard that the winner was outgoing and won races for doughnuts as a child, she knew she was the winner.

“I want people to know there’s more to athletes than the athletic part. I’m involved in a lot of other things at school. I’m going to do my best to live up to his honor,” Graves said.

The 6-foot-6, Phillips, The Sun’s Defensive Player of the Year in football last year, returned to Monday’s banquet from UCLA, where he is already enrolled.

“I felt it was important to come back and represent REV, with all the other great athletes,” said Phillips.

For the season, Phillips recorded 142 total tackles in 11 games, including 11 for loss and 21 total sacks. He also had an interception, forced three fumbles and covered one.

In addition, Phillips was on REV’s state championship team in 2014 and his coming out party came in that state championship game against Concord Clayton Valley. In that game, a 34-33 victory, Phillips blocked an extra point and recovered a fumble that were key in the victory.

Although he said it’s an honor to win the award, he doesn’t feel like he needs to change anything.

“I feel like I already live my life to that standard,” he said.