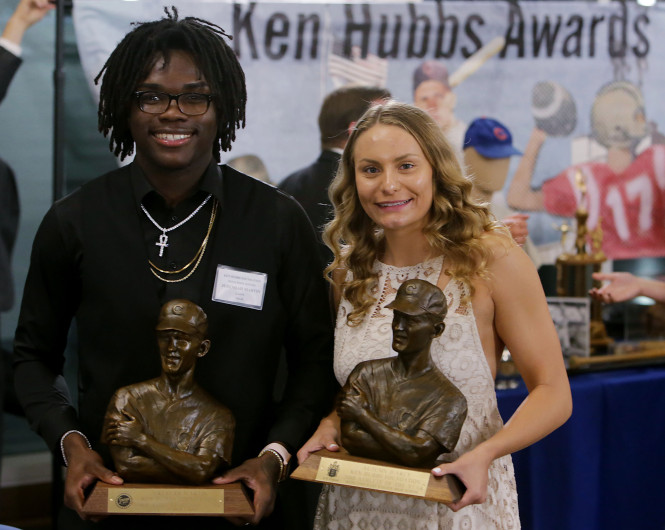 On Monday at Bloomington High School, they learned they had something else in common: overall winners at the 54th annual Ken Hubbs Awards.

There were 50 senior student-athletes recognized Monday, but as usual there was great anticipation for the lone surprise of the night: the overall winners.

“This is an amazing honor. I’m so shocked,” D’Arcy said.

Martin didn’t seem as surprised about winning the award, but how his athletic career evolved.

“After I started playing football my sophomore year, this was unexpected,” Martin said. 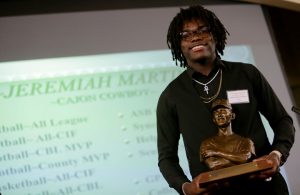 Martin also said he would donate the trophy, a bust of Ken Hubbs to his school.”It’s going to go to my school, so everyone can see it,” Martin said.

Martin, a national recruit in football, has committed to playing at Texas A&M although he excelled in both football and basketball, earning All-CIF Southern Section honors in both. His Cajon team won Citrus Belt League titles in both sports his senior year.

As Cajon’s top defensive lineman, he led the CIF-SS champion Cowboys with 47 tackles for a loss and 30 1/2 sacks in 16 games. He also caused and recovered four fumbles and blocked a punt.

Although D’Arcy excelled in one sport rather than two, she excelled at the CIF level for four years as a swimmer.

D’Arcy, who will be continuing her education, was undefeated at Citrus Belt League finals in her career, winning seven individual and nine relay titles. 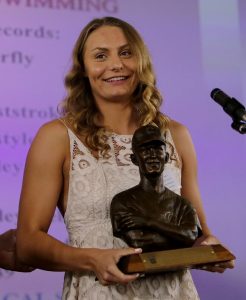 In all, D’Arcy finished among the top seven in an individual or relay event at the CIF-SS Division 2 finals 13 times, including in at least two events every year. REV also finished in the top five each year as a team, including runner-up twice.

Although the voting for the overall award was completed before this year’s CIF-SS finals last weekend, D’Arcy saved her best for last. She was part of the CIF champion 200-meter medley relay team, was runner-up in both the 100 butterfly and 400 freestyle and took fifth in the 200 individual medley.

Cajon’s last overall winner was basketball player Kayla Washington two years ago, but Martin is the first boys winner from Cajon since Shaun Battle in 1992.

The awards marked the second straight year Redlands East Valley won one of the top awards after Jaelan Philips was the boys overall winner a year ago. But D’Arcy is the overall girls winner from REV, in the seventh year of the girls awards.

It also marked the fourth straight year at least one of the overall winners was from the Citrus Belt League and the second straight year both winners were from the CBL. In addition, the girls winner has been from the CBL each of the past four years.

Traditionally, the banquet has been held in the Ken Hubbs gym at Colton High School. But construction at the school necessitated the move to Bloomington. Hubbs was a multi-sport athlete at Colton who was National League Rookie of the Year in 1962 for the Chicago Cubs before he was killed in a plane crash in 1964.

This entry was posted in 2018. Bookmark the permalink.
next
prev